TeamGram knows the hierarchy of your organization and uses this information to make user access rights more manageable.

To understand how things work, we will start with some basic concepts:

TeamGram stores your data in blocks called records. Examples of record types are contacts, companies, deals, leads, orders, and more. A record typically has multiple data fields that are shown together on the same page. You can also determine who in your company can access which record.

In TeamGram, every record has 3 levels of rights:

If your subscription includes only the basic access rights management, you can grant editor or reader rights to either All users or none. Assigning All users as readers means every user in your company can view this record (Even if you don’t grant rights to anyone, the people higher up in the company hierarchy can still exercise the same rights as you. Read the following section to understand how this works).

If your subscription includes advanced access rights management, you can grant editor or reader rights to specific users or departments. Assigning the Production Team as the editor of a record allows anyone in that department (and everyone they report to) to make changes on that document.

The rights settings on any document can be seen at the bottom of its info tab. If you are the owner of a record. you are allowed to change its access rights settings while editing it.

In this example, the support manager can automatically access everything anyone in the pre-sales and post-sales teams can access, because those two teams report directly to her. However the sales manager can’t access a record owned by a member of the production team, unless either he, or his department, or one of the users or departments reporting to him is authorized. Meanwhile, the general manager can access all of these records, because their owners either directly or indirectly report to her.

Administrators can edit the organization chart of a company in the department settings section of the control panel.

There is one special case when the owner of a record is not allowed to edit a document:

Remember that the first person to create a document automatically becomes its owner. You can setup certain records in such a way that its owner can send it to another user for approval.

A typical example is a vacation request form an employee fills out and then sends out to a manager for approval. Since you wouldn’t want users to alter approved vacation dates after they are approved by their managers, TeamGram will not allow owners to make any changes on documents sent for approval.

Although the owner of a record can always make changes to its rights settings, most of the time people in the same department will want to use similar settings for similar types of records.

Your system administrator can enter default access rights for each type of record created by each department. This is done in the department access controls section of the control panel.

In the following example, the default access rights for a new deal created by a member of the Phone Sales department will be automatically set to allow other users in that department to view it, only the owner and his managers to edit it, and nobody else in the company to view it. 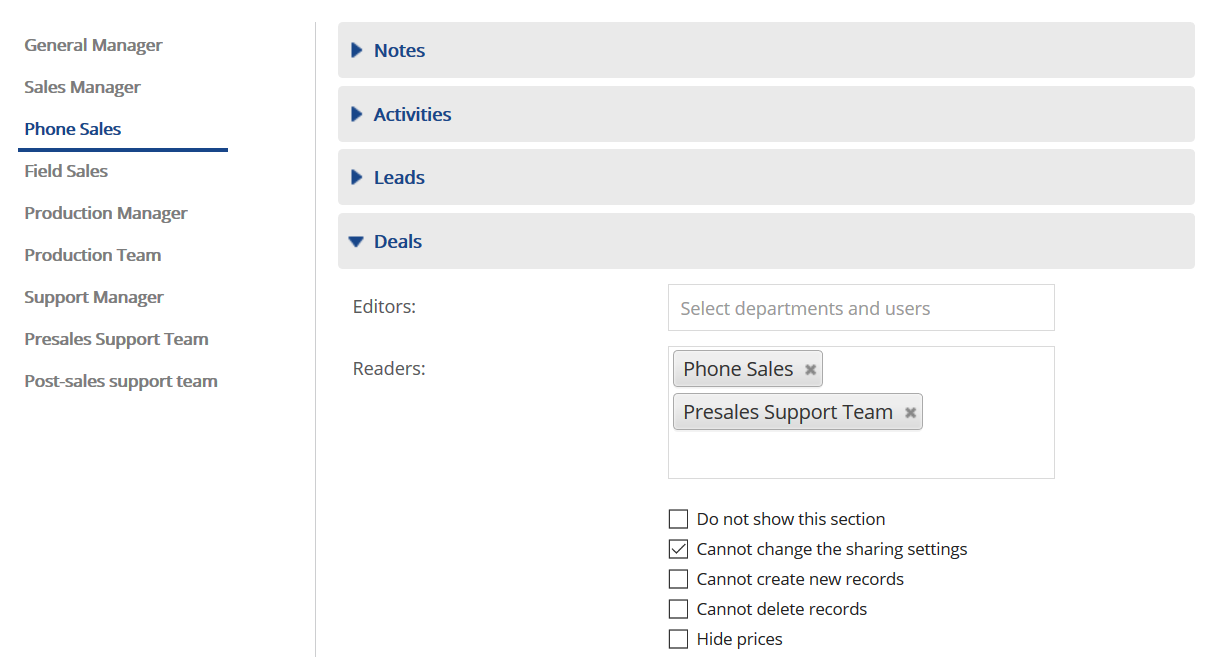 Regardless of the default access rights set in the control panel by the administrator, users are allowed to make changes on a per-record basis (Unless the administrator has specifically prevented them from doing so by checking the Cannot change the sharing settings box above).

As you will see in other sections of this help site, TeamGram allows you to link different types of records. An order can be linked to a deal, which in turn can be linked to a company (customer). The deal itself can also be a linked to a number of sales activities like scheduled phone calls and tasks.

When you create a new record from a tab under another record (as in the activities tab under a deal), TeamGram automatically establishes a relation between the new item and the existing item it was created from, and also copies the access rights from the existing item to the newly created linked item. You can change the suggested sharing settings before saving.

Was this article helpful?